On 16 December, the final conference of the European project NAMIRG took place at the premises of the Region of Friuli Venezia Giulia.

The people behind NAMIRG have done an extraordinary job. It should not be taken for granted that they have been able to work in unison despite the linguistic and cultural differences. NAMIRG is a project about united Europe and common learning, said the Provincial Commander of Trieste, Mauro Luongo.

He praised the work accomplished by the firefighter brigades of the Autonomous Friuli Venezia Giulia Region, Koper and Istria County, under the coordination of the CEI – Executive Secretariat (Lead Partner) to create the first transnational system for efficient emergency response at sea.

This has been achieved over a two-year period thanks to intensive research and analysis of the state-of-the-art in the area of Maritime Incident Response Groups (MIRG) leading to the elaboration of: a personnel training manual; a handbook on standard operating procedures (SOP) for preparing the NAMIRG squad and defining the operations to follow in the event of a fire at sea; and guidelines for materials and devices necessary for the NAMIRG team during helicopter transfer and fire-fighting operations.

NAMIRG has paved the way for transnational cooperation but efforts need to be continued to transfer the knowledge acquired to other countries, and ensure continuous training of the squad to guarantee a 24/7 response to emergencies at sea.

As CEI Secretary General, Roberto Antonione said, We are very proud to have coordinated this important initiative that has, through intensive research and cooperation, led to tangible results, which can be transferred to other countries and be useful across Europe, as expressed by DG ECHO during the final presentation of the project in Brussels last week.

The Prefect of Trieste, Valerio Valenti concluded the meeting wishing NAMIRG to expand and become a model which will enrich many more countries. This is just the beginning of a fruitful journey.

More information and pictures about the project on the website and blog:

The project was funded by the European Commission Directorate-General for European Civil Protection and Humanitarian Aid Operations – DG ECHO. 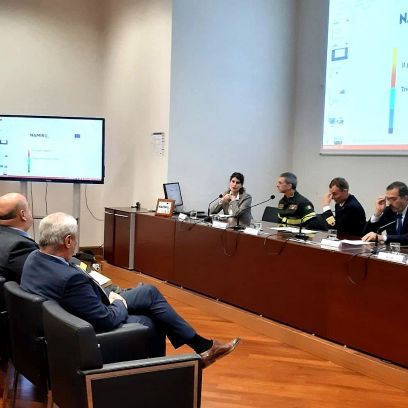 Inter-Connect: signing of MoU for promotion of services examined within case study on Trieste