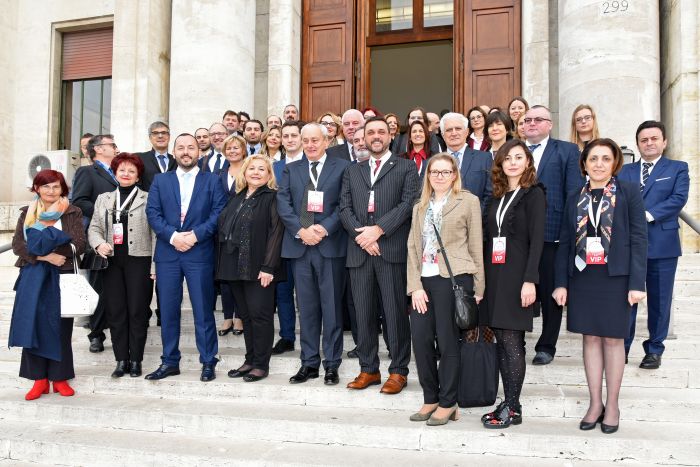 On 18 December, around 50 delegates from 20 countries gathered in Rome - at the premises of the Istituto Superiore di Sanità - ISS (Italian National Public Health Institute) - to participate in the Summit of the Public Health Alliance Central Eastern Europe (PHACEE) supported under the Italian CEI Presidency.

The event aimed at fostering cooperation in Central, Eastern and South-eastern Europe and at promoting a Public Health Alliance that could encompass every action to protect, advocate and advance health safety and security without any discrimination and territorial division. The Summit also aimed at encouraging effective response to health threats and at sustaining public health leadership to achieve sustainable development by 2030. The discussions focused on the key strategies to fight antimicrobial resistance and healthcare-associated infections under the One Health perspective.

Silvio Brusaferro, President of the ISS, mentioned the "Trieste Declaration on Science" saying that Science Diplomacy was emerging as a useful tool for building bridges and strengthening relations in the CEI region. The Italian ISS is supporting the PHACEE in order to enhance science, public health and education in Central and Eastern Europe as a contribution to the consolidation of the European Research Area (ERA).

One of the main topics discussed at the Summit was the promotion of a multilateral consultation in the health sector between EU and non-EU CEI Member States. A delegation of the South-Eastern Europe Health Network (SEEHN) also took part in the PHACEE Summit stating the importance to include the health topic in the transnational collaboration agenda as a key aspect for strengthening regional cooperation.

Secretary General Roberto Antonione welcomed participants and gave an insight on the CEI activities in this field. He mentioned in particular that at EU level, the CEI was a member of the European Innovation Partnership on Active and Healthy Ageing (EIPonAHA) promoted by the European Commission and that the CEI’s commitment in this regard was to bridge EU principles on innovation and health and social policies to CEI Member States. He explained that the Organisation participated in the D4 Action Group on "Age-friendly cities and environments" and in particular, is coordinating the workflow on "Technology innovation and accessibility". He also mentioned that the CEI was currently working on various EU-funded projects such as the Interreg  HEALTHNET (Italy-Austria Programme), where the CEI acted as associated partner; the ITHACA project together with the FVG Region, funded by the INTERREG EUROPE Programme on the topic “smart health and regional ecosystems”; and the DigitalHealthEurope which is a Cooperation and Support Action of HORIZON 2020 where the CEI acts as partner.