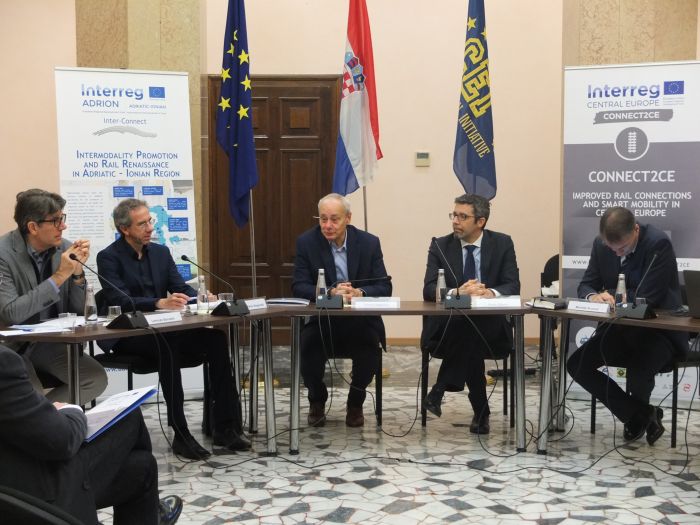 On 12 November, the CEI Executive Secretariat hosted the first dissemination and presentation event, open to the public, regarding the Interreg ADRION project Inter-Connect as well as the roundtable on strategies of cross-border and intermodal connectivity, a topic addressed by the Interreg Central Europe project CONNECT2CE.

Inter-Connect aims at promoting intermodal passenger transport and rail use in the Adriatic Ionian region, by supporting institutions and policymakers, to identify tangible proposals in order to improve the connectivity in the area. The CEI, as project partner, presented to the public the partnership, objectives and project’s case studies, as well as their expected impacts. A specific session was dedicated to the presentation of the case study in the city of Trieste, focusing on improving public transport connectivity with the transnational maritime seasonal lines.

The event was opened with welcome remarks from Roberto Antonione, CEI Chief Operating Officer. Presentations followed by Paolo Dileno, Project Manager of Inter-Connect and CONNECT2CE;  Lorenzo Bandelli, Director at the Municipality of Trieste on Innovation, Tourism and Economic Development; Michele Scozzai, Communication and Institutional Relations Manager at Trieste Trasporti, and Massimiliano Angelotti, a representative from the Friuli Venezia Giulia Region.

A roundtable was organised after the event in order to explore and discuss the focus CONNECT2CE, which aims at improving public transport connections and accessibility of regional, peripheral and cross-border areas of Central Europe to/from the main transport networks and hubs. Project experts gave a brief presentation on two pilot actions that to be implemented in Trieste, while renowned stakeholders from regional authorities and the public transport sector gathered to discuss the transferability of the project’s main topics, as well as the opportunities that similar initiatives bring to the city of Trieste and Friuli Venezia Giulia Region in general.

The gathering commenced with a presentation of a CONNECT2CE first pilot action - integrated intermodal tickets and cross-border ticket on the route Trieste – Villa Opicina – Ljubljana, by Andrea Ballarin and Tito  Stefanelli.  Riccardo Maratini presented the second pilot action - on the cross-border train Mi.Co.Tra and its experimental extension to Trieste, while Giovanni Longo presented an analysis on intermodal accessibility from the Interreg MED project – LOCATIONS.

The roundtable discussion – moderated by Paolo Dileno - focused on intermodality in public transport, positive examples from the region, as well as on the complexities of common discourse and visibility. Roundtable guest speakers were Massimiliano Angelotti, a representative from the Friuli Venezia Giulia Region, Roberto Bassanese, director of APTGO, Sabina Carpi from Ferrovie Udine Cividale, Roberto Gerin, director of Trieste Trasporti, Giovanni Longo from the LOCATIONS project, and Elisa Nannetti, director of Trenitalia FVG. 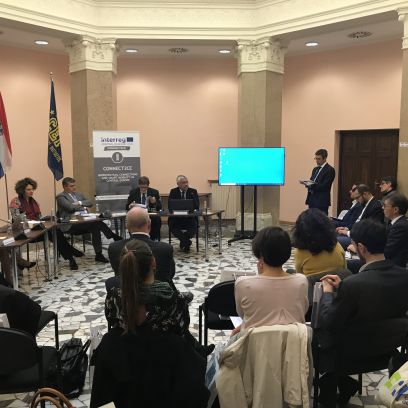