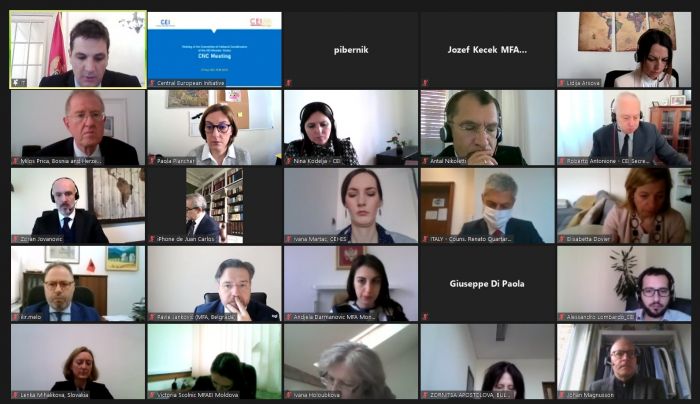 The second meeting of the Committee of National Coordinators (CNC) under the CEI Montenegrin Presidency 2021 was virtually held on 27 May. The gathering witnessed the participation of representatives of the European Commission and of the European Parliament in order to explore possible avenues for cooperation.

The Presidency highlighted that the CEI was the oldest and largest regional intergovernmental forum in Europe with an ability to adapt to the constantly changing scenario worldwide. In this regard, the successful efforts in facing the challenges posed by the Covid – 19 pandemic and in managing to implement its longstanding role of bridging cooperation between the EU and non-EU countries were underlined. Necessary actions to speed up the EU integration process as per the Western Balkan countries as well as to enhance cooperation with the Eastern partnership countries were pointed out.

The Presidency’s introduction was backed up by Secretary General Roberto Antonione’s statement who highlighted that despite the differences between these two sub-regions, both were areas of geopolitical confrontation between Europe and other global or regional players, and that strong alliances were at this point vital “to consolidate the position of the EU into the two strategic areas encompassed in the CEI membership”. He added that since the young people of these countries were the future citizens of the European Union, the future of the EU strongly called for measures directed towards youth through joint actions from the CEI, the European Commission and the European Parliament.

The representative from the DG External Policies at the European Parliament stated that while the EU accession was mainly a foreign policy issue of the EU members, the parliamentary diplomacy represented a powerful tool complementing the governmental dialogue. In this regard, he mentioned several programmes and cooperation instruments between the European Parliament and the Parliaments of the countries of the Western Balkans and Eastern Partnership, where cooperation with the CEI could be envisaged.

The European Commission representative from DG Regional and Urban Policy (DG Regio) highlighted the EC activities with regard to the EU macro-regional strategies, and in particular the Danube Strategy encompassing numerous countries in common with the CEI. Furthermore, several areas where joint cooperation could be stepped up were singled out.

The EU representatives welcomed the CEI efforts in providing perspective to the youth, and expressed readiness to explore cooperation in this area. The National Coordinators complemented the discussions with several examples where cooperation relations could be enhanced and synergies strengthened.

The gathering also focused, among other things, on the organisation of the forthcoming Ministers of Foreign Affairs Meeting taking place on 23 June.