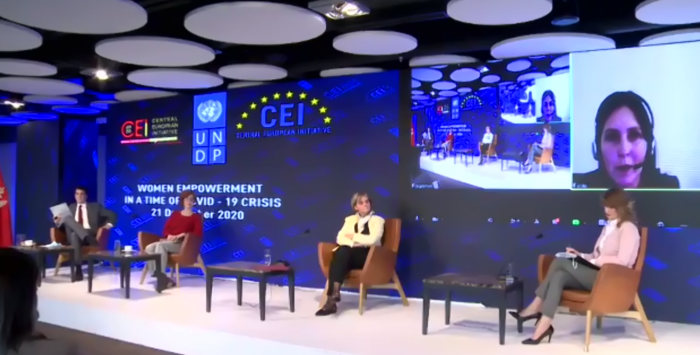 The Montenegrin CEI Presidency 2020 and the CEI-Executive Secretariat (CEI-ES), in cooperation with the UNDP in Montenegro, held a virtual conference on 21 December focused on the promotion of gender equality and the empowerment of women in the region. The timing of the event could not have been more appropriate: this year marks the 25th Anniversary of the Beijing Declaration and Platform for Action, the 20th Anniversary of the UN Security Council Resolution 1325, and the 10th Anniversary of UN-Women.

With the goal of laying out more gender-inclusive recovery approaches, participants across the region exchanged views and experiences on national policy measures and practices, in particular, towards reducing the negative consequences of the COVID-19 pandemic on women and girls, as well as its deteriorating impact on past achievements on gender equality.

But “the pandemic also highlighted the value of women’s leadership and need for solidarity and partnership”, stressed the State Secretary at the MFA of Montenegro, Ljubomir Misurovic.

In this regard, discussions also tackled how women's leadership could change the status of international affairs, emphasising that in order to meet diverse needs, women were to be included at any level of decision-making processes. In response to the widely recognised under-representation of women in key leadership positions, CEI SG Roberto Antonione highlighted the importance of raising global awareness about its damaging effects not only on women but on society as a whole.

Emphasis was also placed on the need for better gender-responsive policies, including targeted efforts to protect women workers and financial incentives for women entrepreneurs, as well as on early childhood education.

With regard to the latter, the gender inequality gap in positions covering the STEM (Science, Technology, Engineering and Mathematics) fields was also dynamically presented. Girls and women are apparently tracked away from science and math throughout their education, limiting their training options as adults. The underlining root causes such as gender stereotypes and male-dominated cultures could be tacked by improving STEM education and support for girls starting in early education as well as by attracting women into STEM fields in universities and improving job hiring, retention, and promotion pathways.

The sociologist, political activist, and prominent expert on gender equality from Slovenia Sonja Lokar called for the attention on three points referring to the need to reevaluate the wages of the feminised care work in public services; diminish women's precarious jobs, and opening a new pillar of social welfare; ways to diminish violence against women to be further tackled. The CEI was thus thanked for providing this important and timely platform and a follow-up gathering was deemed useful, including female MPs from the region.

CEI DSG Nina Kodelja in her concluding remarks emphasised that while the CEI was committed to gender equality, in order to have tangible results, efforts needed to be teamed up by governments, international and regional organisations as well as non-state partners.

In light of the developments witnessed in this challenging year, the CEI-ES has decided to strengthen its activities linked to gender equality in the upcoming plan of Action 2021-2023. 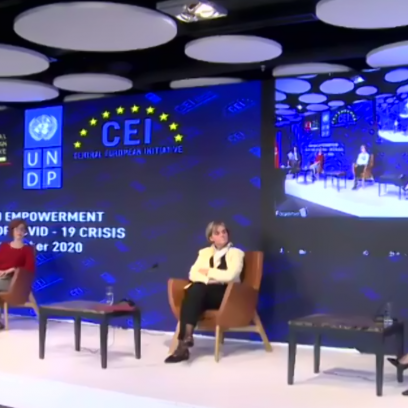 A delegation of the CEI-Executive Secretariat, led by the Secretary General Roberto Antonione, visited Sofia today for consultations on the priorities and programme of this year’s Bulgarian CEI…

CEI Secretary General Roberto Antonione participated in the 11th edition of the Belgrade Security Forum on 28 October 2021 under the title of Testing Humanity. He was a speaker during the session…

The Parliamentary Committee of the CEI Parliamentary Dimension met on 15 June for an online meeting under the title “Promotion of equality and solidarity mechanisms in health care”. The Head of…

The second meeting of the Committee of National Coordinators (CNC) under the CEI Montenegrin Presidency 2021 was virtually held on 27 May. The gathering witnessed the participation of representatives…

On 24 march, the CEI-Executive Secretariat and the Montenegrin CEI Presidency jointly organised an online event, “SDGs Decade of Action – Exchange of Experiences, Best Practices and Current…