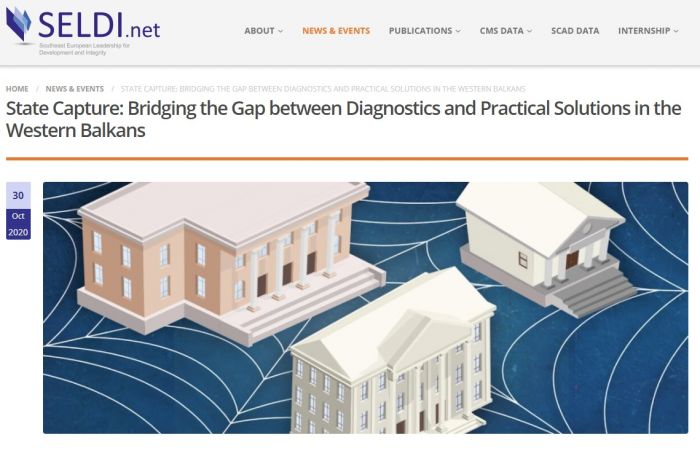 The Southeast Europe Leadership for Development and Integrity (SELDI) anti-corruption initiative held a webinar presenting the State Capture Assessment Diagnostics (SCAD) tool on 30 October 2020 as part of the CEI KEP project “Capacity Building for Implementing Innovative EU Monitoring Tools for Good Governance and Anti-Corruption” funded under the CEI Fund at the EBRD.

The SCAD results reveal that multiple economic sectors in the region show symptoms which can potentially be attributed to state capture. In particular, the data found that the main challenge for the countries in the region remains in the form of state capture enablers, such as media control, corruption in the judiciary, lack of integrity of public organisations, lack of impartiality and inadequate anti-corruption procedures.

Viola von Cramon-Taubadel, MEP, in her key note “The European Rule of Law Future for the Western Balkans” stressed that the EU could take a two-step initiative to ease state capture vulnerabilities in the region. On the one hand, by opting for a more active role in aid management it could achieve a more efficient and transparent handling of funds, on the other, it should promote the use of objective data and criteria to assess and tackle state capture.

The SCAD data also suggested that the situation has worsened with the Covid-19 crisis.

* The designation Kosovo is without prejudice to positions on status and is in line with UNSCR 1244/1999 and the ICJ Opinion on the Kosovo declaration of independence.

GECCOSPARK, a KEP project funded by the CEI Fund at the EBRD and led by the University of Fer

We are glad to announce the Call for Proposals for the CEI Know‐how Exchange Programme (KEP), a development instrument aimed at supporting the transfer of expertise from organisations in the EU to peers in the non‐EU countries within the CEI region.
Read more
Know-how Exchange programme
KEP

COVIDAI is a CEI-funded project in the