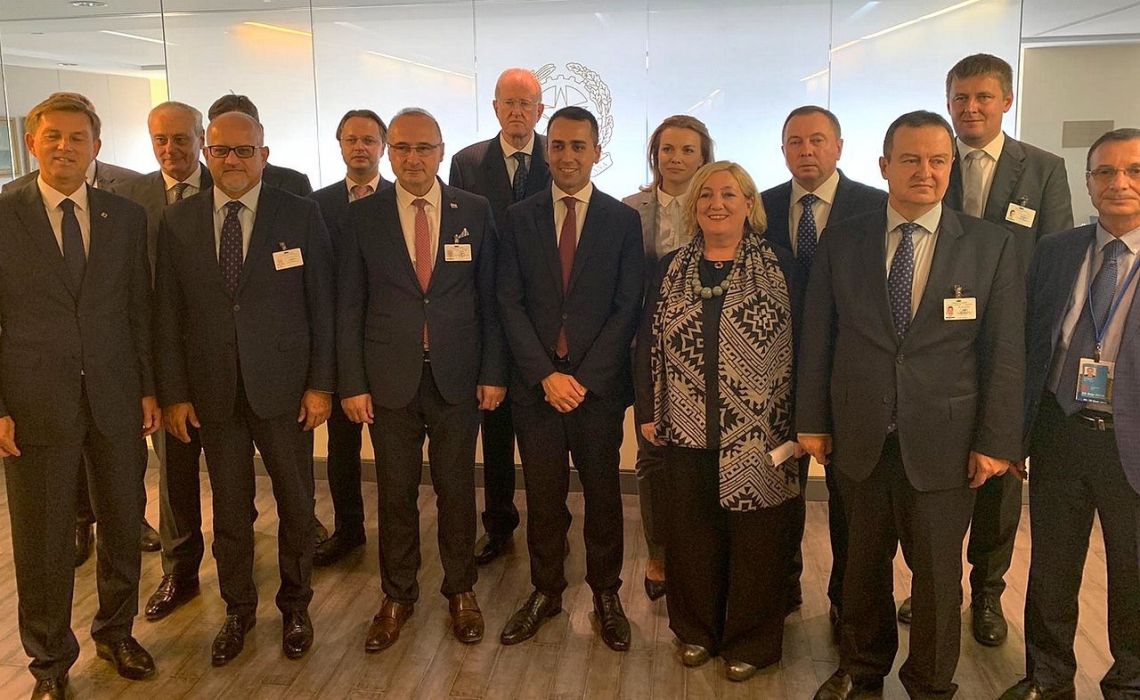 The Ministers of Foreign Affairs of the CEI Member States gathered in New York on 25 September 2019 for their traditional meeting on the margins of the United Nations General Assembly (74th  Session).

The event, organised in the framework of the Italian CEI Presidency at the premises of the Italian Permanent Mission to the United Nations, was hosted by Minister of Foreign Affairs and International Cooperation of Italy, Luigi Di Maio. It offered the opportunity to discuss how to achieve the goal of consolidating the CEI’s position in the regional and international arena - as established by the Trieste Declaration adopted on 12 June 2019 - by using the CEI’s Observer Status at the UN General Assembly. In this context, the Ministers discussed how to improve coordination among CEI MS, in particular within the UN framework, on issues of common interest related to the implementation of the UN 2030 Agenda for Sustainable Development, youth empowerment as well as through various other possibilities offered by the UN such as side-events, as the one organised in July by the CEI-Executive Secretariat and the Italian CEI Presidency at the UN Headquarters on “The contribution of regional cooperation and partnerships to the implementation of the 2030 Agenda: the experience of the Central European initiative (CEI)“; in the framework of the biannual meetings between the UN and regional organisations, including the CEI; and others.

To this end, Minister Di Maio proposed the establishment of a regular format of interaction between the Permanent Missions of the CEI Member States to the United Nations with the aim to better coordinate the actions. This proposal was accepted by all Ministers.

CEI Secretary General, Roberto Antonione, who also attended the meeting, thanked all participants for their commitment and expressed satisfaction with the above-mentioned proposal. He  highlighted, in particular, that regular CEI meetings at the UN would enable the CEI to enhance its partnership with the Organisation by providing valuable inputs to its actions.

This has become a traditional gathering in particular with regard to the CEI observer status in the UN General Assembly, which was granted to the CEI in 2011 by resolution 66/111.

The unanimous decision taken on that occasion expressed the General Assembly's recognition of the CEI as the largest and oldest intergovernmental forum for regional cooperation.