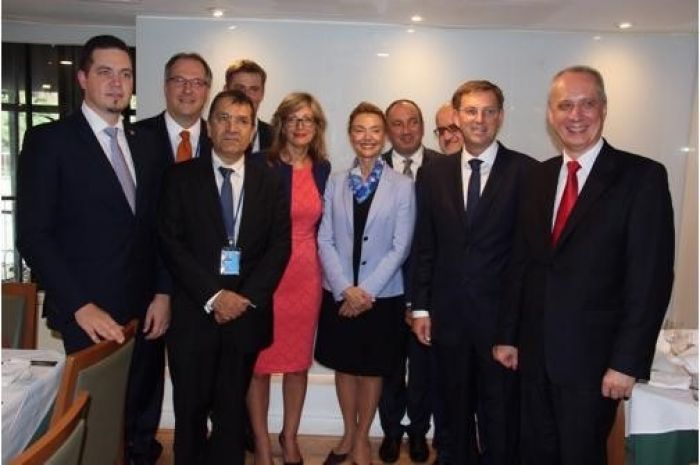 The Ministers of Foreign Affairs of the CEI Member States held their traditional informal meeting in New York, on the margins of the United Nations General Assembly (73rd  Session), on 26 September 2018.

The event was organised by the Permanent Representation of the Republic of Croatia to the United Nations, in the framework of the Croatian CEI Presidency.

The meeting was opened by the Deputy Prime Minister and Minister of Foreign and European Affairs of the Republic of Croatia, Marija Pejčinović Burić, who briefed the Ministers on the results of the past activities and announced the upcoming activities in the framework of the Presidency, including the CEI Summit of the Heads of Government, foreseen in December 2018.

The Ministers also discussed the most topical issues concerning the region. Minister Pejčinović Burić presented the draft Resolution on Cooperation between the UN and the CEI, to be adopted on the occasion of the biannual meeting between the UN and the regional organisations acting as observers. CEI Alternate Secretary General, Antal Nikoletti, addressed the Ministers highlighting the key role played by the CEI in promoting regional cooperation thanks to its unique membership and combination of a solid institutional dimension with a comprehensive project-oriented roadmap. In that context, he underlined the great potential offered by the CEI Fund at the EBRD which, over the last 25 years, has mobilised around 6 billion EUR. "Further developments are expected, also considering that in 2019 the CEI will celebrate its 30th anniversary during the Italian Presidency", noted Nikoletti.

This has become a traditional gathering in particular with regard to the CEI observer status in the UN General Assembly, which was granted to the CEI in 2011 by resolution 66/111. The unanimous decision taken on that occasion expressed the General Assembly's recognition of the CEI as the largest and oldest intergovernmental forum for regional cooperation.

Expert Conference: Energy Efficiency in buildings - for a better tomorrow held in Zagreb

Opened by Minister of Foreign Affairs Đorđe Radulović, the 1st online Committee of National Coordinators Meeting under the Montenegrin CEI Presidency 2021 (24 February) presented the priorities and programme of events envisaged for this year.
Read more