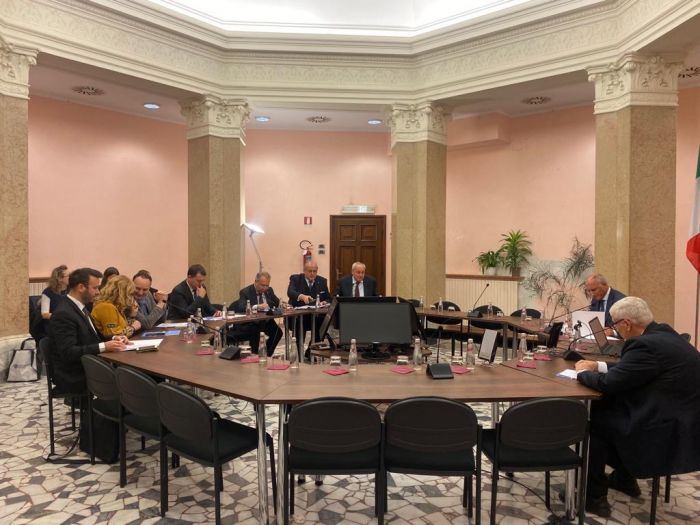 On 3 December, the Round Table under the title "A supporting Europe: judicial and security cooperation" was held at the CEI HQ in Trieste. The event was a chance to reflect upon cooperation in judicial and criminal matters within the EU framework established by the Lisbon Treaty, as well as on possible cross-border and transnational collaborations, to be explored also with the CEI’s support.

Secretary General Roberto Antonione with an opening speech welcomed, among others, the Mayor of Gorizia, Rodolfo Ziberna; the Budget Councilor of the Municipality of Gorizia, Dario Obizzi; the President of the Municipal Council of Trieste, Francesco Di Paola Panteca and the Regional Superintendent of Prison of FVG Region, Enrico Sbriglia.

The discussions highlighted common views about the importance of promoting actions aimed at exchanging knowledge and good practices, even with the involvement of CEI countries not yet members of the EU. A lot is needed in light of the transnational nature of the main security threats, which, therefore, requires concerted responses among countries and individuals.

In this regard, a contribution from an intergovernmental forum such as the CEI can be particularly useful for building multi-level partnerships with strategic countries, such as those of the Western Balkans.

Opportunities available through EU funding were also mentioned. Participants highlighted that if they were well exploited, bottom-up channels capable of affecting decision-making and policy processes at the EU level would be possible.

The participants of the Round Table agreed to broaden the debate on justice, security and rehabilitation, also taking into account the fact that, thanks to its history and geographical location, the Friuli Venezia Giulia Region could represent a lab experimenting ideas and innovative practices. It could also facilitate cooperation and exchange between and among central and eastern European countries and the Balkans.