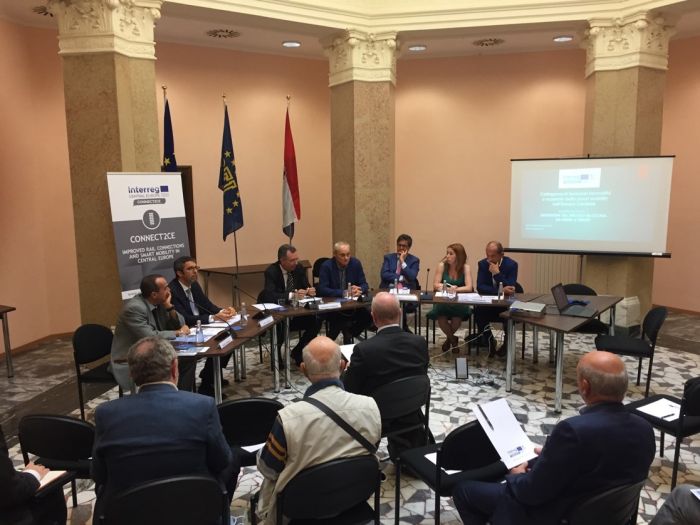 On 14 June the CEI hosted the launch event of pilot action n. 1 of the CONNECT2CE project, financed by ERDF under the Interreg Central Europe programme. The event, promoted by Ferrovie Udine Cividale, officially launched the experimental extension to Trieste of the cross-border train Mi.Co.Tra, originally financed within a cross-border cooperation project under the Interreg Italy-Austria programme (2007-2013).

“A cross-border project that has achieved a first major success on the route from Villach to Udine and now, with the extension to Trieste, promotes a railway connection that starts from Vienna and arrives in Trieste, with the aim of launching the Trieste-Ljubljana direct link by the beginning of next year ", stated Graziano Pizzimenti, regional assessor on infrastructures and territory.

Maurizio Ionico, sole administrator of Ferrovie Udine Cividale, underlined the importance of this new extension and gave an overview of the first excellent data about passengers that travelled in this new route during the first two weekends of June: 955 passengers and 415 bikes have been recorded on the route Udine – Trieste.

Another pilot action of CONNECT2CE project will soon be launched in Friuli Venezia Giulia region and will focus on promoting an integrated multimodal (bus+train) and cross-border ticket on the route Trieste – Villa Opicina – Ljubljana.

The project  CONNECT2CE is funded by ERDF under the Interreg Central Europe Programme and aims at tackling the weak accessibility of regional, peripheral and cross-border areas of Central Europe to/from the main regional/national/EU transport networks and hubs.