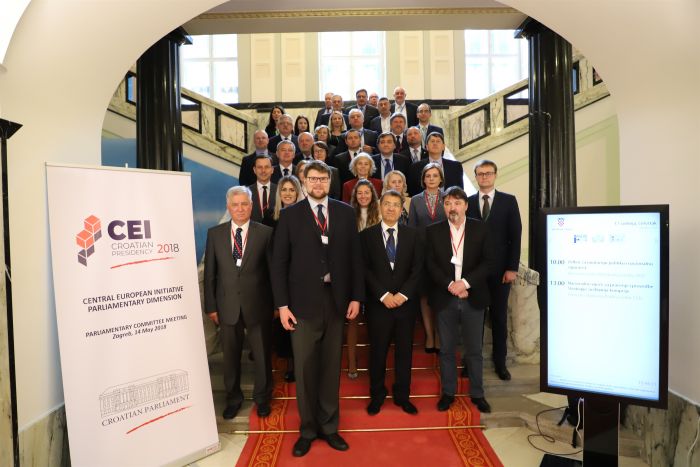 Over 40 representatives from 15 parliaments of the CEI Member States gathered in Zagreb, on 14 May, to attend the meeting of the Parliamentary Committee of the CEI Parliamentary Dimension held under the Croatian CEI Presidency.

The meeting, chaired by Peđa Grbin in his capacity as President of the CEI Parliamentary Dimension, focused on sustainable tourism.

In his welcome speech, CEI Deputy Secretary General, Antal Nikoletti, firstly praised the Croatian CEI Presidency for its programme of activities promoting regional cooperation and European integration in key areas such as intermodal transport, migration, energy efficiency, entrepreneurship development, tourism and culture. He also highlighted that the CEI Parliamentary Dimension was an added value for the CEI because only a few organisations had the potential to gather such a high number of members of parliaments from different countries.

Nikoletti underlined that tourism played an important role in economic development and that it had a relevant impact on many sectors of society. He added that digital transformation was a current challenge which would highly contribute to developing sustainable tourism in the CEI region.

After a constructive debate and fruitful exchange of experiences, the Parliamentary Committee adopted a Joint Statement. It also elected the new chairs of the CEI Parliamentary General Committees until the end of 2019. The GC on Political and Home Affairs, the GC on Economic Affairs and the GC on Cultural Affairs will be chaired by Bulgaria, Poland and Hungary, respectively.

​Opening of accessible for all exhibition “Work is Invisible” of Arbeitswelt Museum in Steyr, Austria