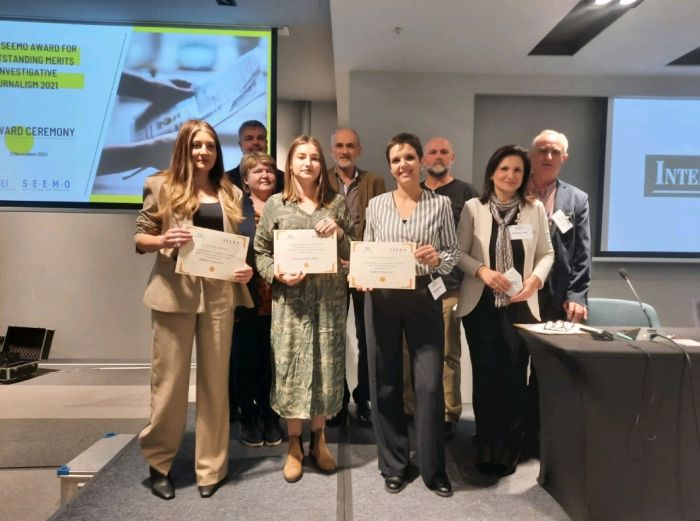 Sadeta Bajrović from Bosnia and Herzegovina and Milica Vojinović from Serbia are the winners of this year’s CEI SEEMO Award for Outstanding Merits in Investigative Journalism, promoted by the Central European Initiative (CEI) and the South East Europe Media Organisation (SEEMO). Nermina Kuloglija from Bosnia and Herzegovina and Vlad Odobescu from Romania have received a special mention.

Sadeta Bajrović, investigative reporter at the Center for Investigative Reporting (CIN) in Bosnia and Herzegovina is the winner in the “Professional Journalists” category. The jury has prized her accomplished stories focusing on vulnerable and ordinary people such as "Fighting Bureaucrats for Children's Lives" and "Citizens finance harmful private businesses” tackling topics of great importance for the whole society. While undertaking a rigorous research activity, Bajrovic provided citizens with accessible and clear information, which was particularly needed in times of the COVID-19 epidemic.

Milica Vojinović, investigative reporter at the Crime and Corruption Reporting Network – KRIK, Serbia, is the winner in the “Young Professional Journalists” category. She has published various stories covering organised crime topics. During the pandemic, regardless of the limited resources and the lack of accessible information, she was able to carry out several serious and accurate investigations, even under pressure and personal risk.

Taking into account the high quality of the candidatures, the jury has also decided to assign two special mentions. Nermina Kuloglija from the Balkan Investigative Reporting Network (BIRN) in Bosnia and Herzegovina, was praised for the database she produced during the pandemic comprising public procurements across the country related to medical equipment, which also allowed her to disclose some notable corruption stories. Vlad Odobescu, a freelance journalist and member of the Romanian Centre for Investigative Journalism, was appreciated for his contribution to a data, narrative, and investigative project on the vulnerabilities of mobile workers at a time of Covid-19, carried out by an international team of journalists.