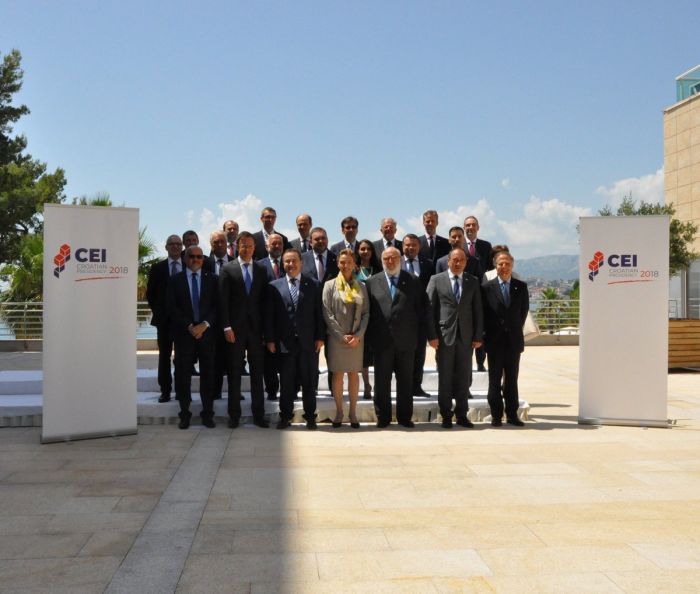 The Ministers of Foreign Affairs of the Member States of the Central European Initiative held their annual meeting in Split (Croatia) on 11 June 2018 under the Croatian CEI Presidency. The gathering was chaired by the Deputy Prime Minister and Minister of Foreign and European Affairs of the Republic of Croatia, Ms. Marija Pejcinovic Buric, who confirmed her country's commitment to the CEI mission and objectives. Indeed, the activities of the Presidency in the first half of the year focused on a number of relevant topics for the region, such as sharing knowledge on European integration, regional cohesion, combined transport and migration.

The Ministers emphasised the role regional cooperation played for advancing the CEI's principal mission in promoting European integration and sustainable development. They confirmed their commitment to jointly tackle the challenges the region was facing (e.g. migration crisis, climate change), and, therefore, prevent irregular migration and brain drain, promote enhanced transport and energy connections as well as digitalisation and cybersecurity and foster intercultural cooperation.

The Ministers noted, however, that in such fast-changing circumstances, the countries’ priorities could also shift towards other directions. This was the case with Austria, which notified its withdrawal from the Initiative, after being an important player for 29 years. Nevertheless, Austria confirmed its commitment to further assist the region - in particular with regard to the European integration process - through other forms of cooperation and partnerships.

CEI Secretary General, Amb. Giovanni Caracciolo di Vietri, while expressing his regret about Austria's withdrawal, underlined that the CEI should be prepared to adapt to new scenarios, and thus continue the process of rethinking the Organisation. That is, by updating its statute with fresh elements regarding an increased multilateral aspect, a recognised project-oriented approach and improved structure of the Secretariat; and by developing a shared political strategy, through an increased role in the Berlin Process, enhanced cooperation with the EC as well as with regional and international organisations.

The Ministers acknowledged that the CEI Plan of Action 2018-2020 was a valid instrument, which could effectively contribute to further strengthening the organisation, together with its project-oriented approach. In this regard, they approved the new scale of contributions to the CEI Cooperation Fund for 2019, aimed at financing regional activities.

Finally, the Ministers expressed their best wishes to Croatia for the second semester of its Presidency and welcomed the Italian CEI Presidency for 2019.

The Ministerial meeting was preceded by a meeting of the Committee of National Coordinators.

The Communiqué adopted at the Meeting of the CEI Ministers of Foreign Affairs is available HERE. 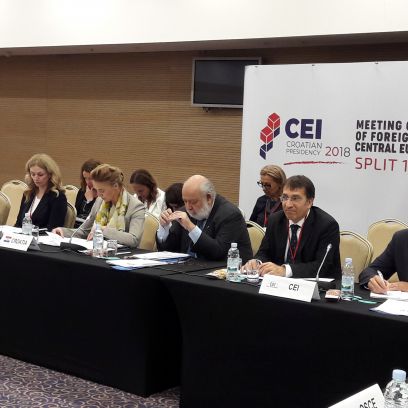 Humanitarian contribution of CEI to people of Ukraine

In response to the extremely dire and worrying humanitarian emergency in Ukraine, a CEI Member State, the CEI has decided to provide support to the people, affected by the conflict in Ukraine, …

The 1st Committee of National Coordinators Meeting under the Bulgarian CEI Presidency was held in Trieste on 23 February. Ms. Irena Dimitrova, Deputy Minister of Foreign Affairs of the Republic of…

Today, on the margins of the CEI Summit, organised by the Montenegrin CEI Presidency and the CEI-Excecutive Secretariat, a special event dedicated to the endorsement of the WHO “Roadmap for Health…

The 4th Committee of National Coordinators’ meeting, under the Montenegrin CEI Presidency 2021, took place at the CEI Headquarters in Trieste on 11 October. The morning session focused on recent and…

On 8 October, Ministers, State Secretaries and other high officials dealing with environmental issues in CEI countries gathered in Trieste for a Conference organised within the Sea Summit hosted by…

We need constructive dialogue, solidarity and re-engagement to address the challenges and the European perspective of the region. This was the overall message expressed by the Ministers of…