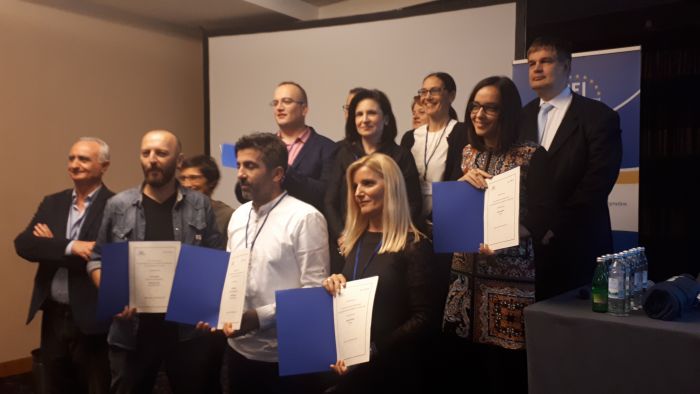 The CEI and the South East Europe Media Organisation (SEEMO) have announced the winners of the “CEI SEEMO Award for Outstanding Merits in Investigative Journalism 2019”: Ermin Zatega (Bosnia and Herzegovina) and Mubarek Asani (North Macedonia) in the section “Professional Journalists” and Arlis Alikaj (Albania) in the section “Young Professional Journalists”.

Ermin Zatega and Mubarek Asani work at the Center for Investigative Journalism (CIN) in Bosnia and Herzegovina. The award is meant to recognise their contribution to the investigative journalism in Bosnia and Herzegovina and the Western Balkan region, especially for the impact that their teamwork stories had on society in a challenging environment. In particular, they have been working on a cross-border environment investigation on the hazardous waste produced by Tuzla chemical companies and which have not been dismantled properly. Their stories have contributed to awareness raising, also at the European level, of the environmental problems in Tuzla affecting the entire region.

Arlis Alikaj has been working on a new story dealing with illegal logging in Albania’s biggest national park, Shebenik-Jabllanice, a world heritage site protected by UNESCO. This award is meant to acknowledge his courageous reporting and the importance of the work of young local journalists. During his work, Alikaj had to face many challenges including harassment and threats.

A Special Mention was assigned to Jagoda Bastalic from Croatia, for her independent work in investigative journalism and in-depth professional reporting made for the public broadcasting company Croatian Radiotelevision (Hrvatska radiotelevizija - HRT). She addressed an unknown problem in the Obrovac natural area, where an investor had planned to build a waste grit treatment plant in a shipyard which was not treating waste according to the regulations and having catastrophic effects for the environment.

The jury also decided to bestow a special mention to Dina Djordjevic for her contribution, as young journalist working in a team with Vladimir Kostic, in investigating important environmental topics in her country, Serbia, while facing threats and several challenges.

This year the Award had a special focus on environmental issues. 23 nominations, covering 11 countries, have been submitted, confirming the region-wide impact and relevance of the Award.