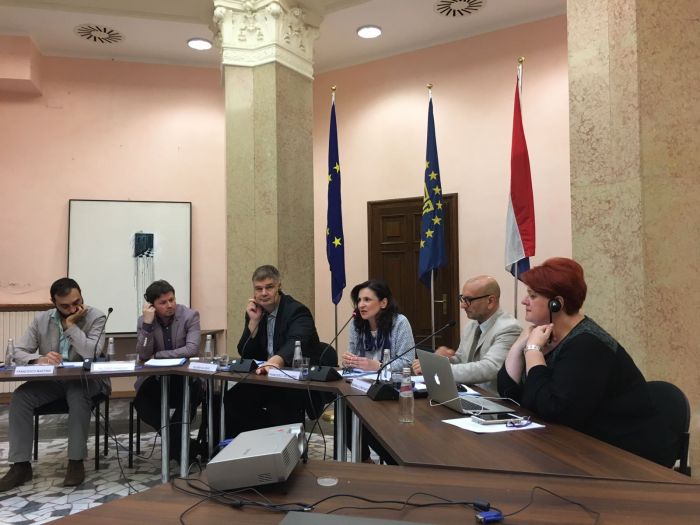 On the occasion of the meeting of the jury of the CEI SEEMO Award for Outstanding Merits in Investigative Journalism, held in Trieste on 29 June, the CEI Secretariat - in cooperation with the news agency ANSA - organised a open panel discussion on the media in South East Europe.

The audience actively debated upon topics such as media freedom and transparency, quality journalism, investigative journalism. During the event, a short video from Syria was presented by Marco Gombacci as an example of journalistic work under difficult and precarious conditions.

Media freedom and freedom of expression in general are high on the list of social improvements to be achieved on the road to EU membership.  That is why the CEI is particularly engaged in supporting activities promoting free and diverse media. The CEI is also particularly committed to endorsing investigative journalism through the CEI SEEMO Award as well as to supporting the annual South East Europe Media Forum which provides a valuable opportunity for exchanging best practices of professional reporting and encouraging a debate at various levels tackling the relationship between media and politics.

The next South East Europe Media Forum is taking place in Tirana, Albania, on 15-16 November 2018.

COME-IN!: opening of accessible-for-all exhibition of Museum of Prehistory and Protohistory of Thuringia, Weimar

Over 250 participants representing editors-in-chief, leading journalists, business professionals, civil society and academia from the CEI region and beyond as well as representatives of international organisations and state institutions gathered in Zagreb, Croatia, on 4-5 November for the South East Europe Media Forum (SEEMF).
Read more
Media freedom

Prominent science reporters, editors and researchers from the region gathered on Friday 5 April at the Radio televizija Srbije in Belgrade for the first of three Balkan Science Journalism workshops.
Read more