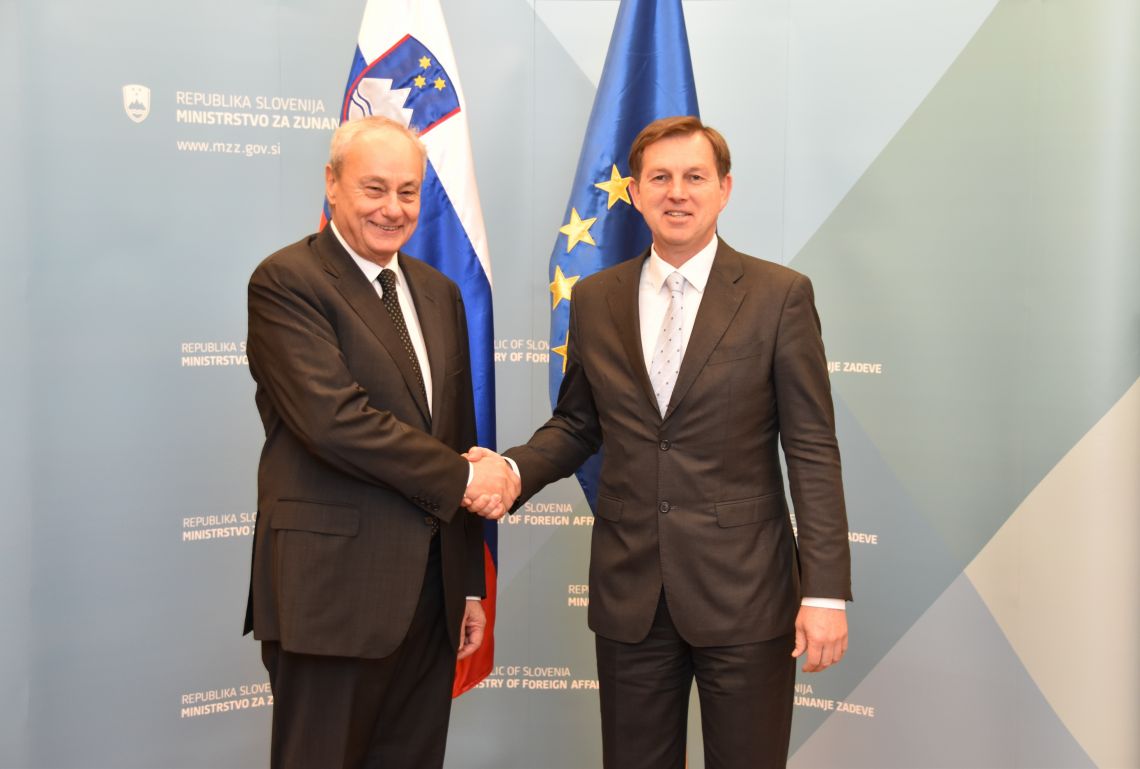 On 19 February, CEI Secretary General Roberto Antonione and a delegation from the CEI-Executive Secretariat visited Slovenia. They met with the Minister of Foreign Affairs Miro Cerar and the State Secretary at the Ministry of Foreign Affairs Simona Leskovar, as well as with the President of the National Assembly of Slovenia, Dejan Židan, the Head and the members of the Slovene delegation to the CEI Parliamentary Dimension and the General Manager of the Chamber of Commerce and Industry.

The Secretary General and the Minister of Foreign Affairs Miro Cerar discussed the future strategic direction of the CEI and further possibilities for enhancing cooperation, especially with regard to the region of the Western Balkans, as well as the Eastern Partnership area.

“We will invest our efforts in strengthening our role as an important tool for CEI Member States and the implementation of the mission of our organisation”, Antonione stressed.

In the talks with the State Secretary Simona Leskovar, Slovenia’s support for the strengthening of ties with the CEI in the areas of culture, science as well as other areas (projects in the areas of infrastructure etc.) was expressed. The CEI  - with its instruments  - is valuable in supporting the experience and knowledge sharing among its members. The importance of focusing on youth and their perspective was especially emphasised.

In view of further consolidating the Parliamentary and Business Dimensions of the CEI, meetings were held with the President of the National Assembly of Slovenia, Dejan Židan, the Head and the members of the Slovene delegation to the CEI Parliamentary Dimension as well as with the General Manager of the Chamber of Commerce and Industry.

As a whole, the mission reaffirmed the role of Slovenia as a very proactive member of the CEI, highly committed to supporting the mission of European integration and sustainable development through political dialogue and project-related activities. The nomination of the Deputy Secretary General from Slovenia highlights the involvement of Slovenia in the CEI.

The visit took place in the context of the Secretary General’s visits to CEI Member States in order to listen to  priorities for the CEI and for the implementation of the mission of the organisation as well as to present the new leadership of the CEI-Executive Secretariat.

On 18 December, around 50 delegates from 20 countries gathered in Rome - at the premises of the Istituto Superiore di Sanità - ISS (Italian National Public Health Institute) - to participate in the Summit of the Public Health Alliance Central Eastern Europe (PHACEE) supported under the Italian CEI Presidency.
Read more
Governmental Dimension
Italian/Presidency