Italy-Slovenia: toward a European future of shared growth 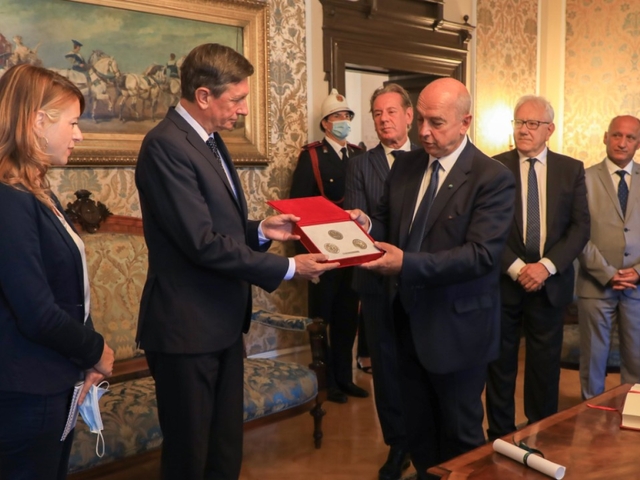 (ANSA) - TRIESTE, 10 LUG - TRIESTE, JULY 10 - "With esteem and appreciation, under the banner of the excellent relationship between Italy and Slovenia, underlining the role of Trieste, a friendly city, 'bridge' of dialogue and daily cooperation between our countries and peoples, we shall continue to look forward, always side by side, moving together toward a European future of shared growth, development and prosperity." Trieste mayor Roberto Dipiazza, with this message, gave the President of the Republic of Slovenia Borut Pahor the triptych of the historic seals of the City of Trieste in today's meeting in the Town Hall. Among those attending the ceremony, the city councilor for culture Giorgio Rossi, the regional councilor Fabio Scoccimarro, the president of the municipal council Francesco Di Paola Panteca and the consul general of SloveniaVojko Volk. The 'triptych' of the seals of Trieste represents the highest municipal recognition and until now had been given by the mayor Dipiazza only to the Italian President of the Republic Carlo Azeglio Ciampi. President Pahor said he considered this gesture as "a signal that we are on the right path, we must continue to work together in the name of coexistence, cooperation, and friendship for peace, well-being, and prosperity for all of us and of future generations." Pahor then pointed out that, in a few days, the first anniversary of the tribute he paid along with President Mattarella on the symbolic places of the tragedies of these lands in Basovizza will occur. "In that handshake, there was the demonstration of our firm will to favor that sense of coexistence, friendship, and a common European future." "But that handshake - President Pahor added - could not have taken place without the help of many who are here today and of course without Mayor Dipiazza." "That day in Basovizza - said Mayor Dipiazza - we shared the complicated history of these lands. When you shook hands, I was excited, and I shed a tear. It was an important gesture. Thank you, President, on my behalf, of the city and in the name of our entire country." (ANSA).