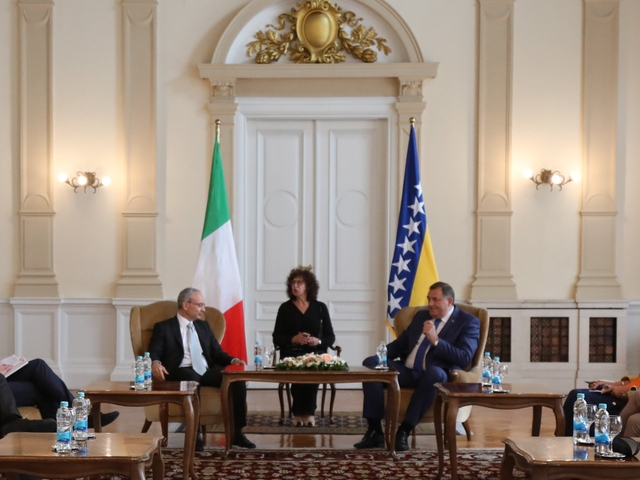 (ANSA) - TRIESTE, 07 LUG - Italy's ambassador to Bosnia and Herzegovina, Marco Di Ruzza, met the Presidency College of Bosnia and Herzegovina, Milorad Dodik. Di Ruzza presented to Dodik the reference letters sent to him by the President of the Republic, Sergio Mattarella. On that occasion, Di Ruzza reminded Dodik of "the traditional deep historical, economic, social and cultural ties that make bilateral relations rich and fruitful in every sector." Furthermore, the ambassador - reads a statement - underlined "his intention to work during his term to expand the areas of collaboration between Italy and Bosnia and Herzegovina as much as possible, also looking at the dynamism of commercial relations and the numerous Italian companies that operate successfully in the country in full synergy with Bosnian-Herzegovinian partners." In this context, Di Ruzza also pointed out Italy's commitment to opening an Institute of Culture in Sarajevo, which will contribute to further deepening the cultural relations between the two countries. Italy, Di Ruzza, underlined strongly supports the European path of Bosnia and Herzegovina, being aware that only the integration of the Western Balkans into the EU will be able to complete the European project, making Europe a great pole of peace, stability, well-being, and security in the face of global challenges. (ANSA).