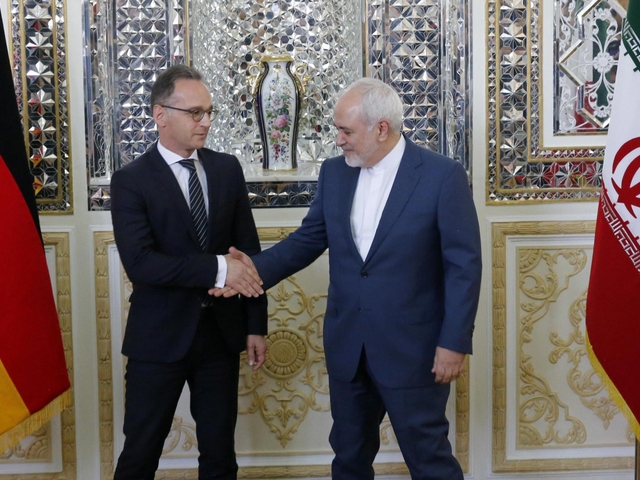 TEHRAN, Iran (AP) - Germany's foreign minister met with his Iranian counterpart on Monday in Tehran, a visit aimed at easing tensions between the Islamic Republic and the United States, and salvaging Iran's 2015 nuclear deal with world powers. Heiko Maas held talks with Foreign Minister Mohammad Javad Zarif after earlier stops in the United Arab Emirates and Jordan on Sunday as part of his Mideast trip. Last year, the U.S. withdrew from the nuclear deal and re-imposed sanctions on Iran targeting the country's oil sector. The nuclear deal saw Iran agree to limit its enrichment of uranium in exchange for the lifting of economic sanctions. Regional tensions recently soared over America rushing an aircraft carrier and B-52 bombers to the Mideast over a still-unexplained threat from Iran. Maas said his visit was aimed at getting Iran to agree to stay in the deal. Germany is a signatory to the accord. Iranian state TV also reported that Maas would hold talks with President Hassan Rouhani during his visit. Some countries, including Japan, have offered to mediate in the latest crisis. Japanese Prime Minister Shinzo Abe will arrive on Wednesday to Iran and will become the first sitting premier to visit Iran since its 1979 Islamic Revolution. Abe has been seen as a trusted interlocutor between Iran and Trump. The German diplomat called Iran's ballistic missile program problematic during a news conference Sunday in the UAE. In response, Iran Foreign Ministry spokesman Abbas Mousavi said: "European officials are not in a position to comment on Iran's issues beyond the nuclear deal." Iran recently threatened to resume higher enrichment in 60 days if no new nuclear deal is in place, beyond the level permitted by the current one between Tehran and world powers. The semi-official Tasnim news agency reported that Ali Asghar Zarean, deputy head of Iran's nuclear department, said Tehran had increased the number of its centrifuges to 1,044 at the Fordo underground facility Without elaborating on the model of centrifuges in Fordo, Zarean added it was 720 centrifuges before the 2015 nuclear deal. The head of the Atomic Energy Organization of Iran, Ali Akbar Salehi, said last month that Iran had begun installing a chain of 20 IR-6 centrifuges at its underground Natanz enrichment facility. Iranian officials say the IR-6 can enrich 10 times faster than an IR-1. In late May, the U.N. nuclear watchdog said that "up to 33" more advanced IR-6 centrifuges have been installed and that "technical discussions in relation to the IR-6 centrifuges are ongoing." Under terms of the nuclear deal, Iran is allowed to test no more than 30 of the IR-6s once the deal has been in place for 8 1/2 years. The deal is murky about limits before that point, which will arrive in 2023. A centrifuge is a device that enriches uranium by rapidly spinning uranium hexafluoride gas. Under the atomic accord, Iran has been limited to operating 5,060 older models of IR-1 centrifuges. AMIR VAHDAT/