Croatia conservatives on course for victory at polls 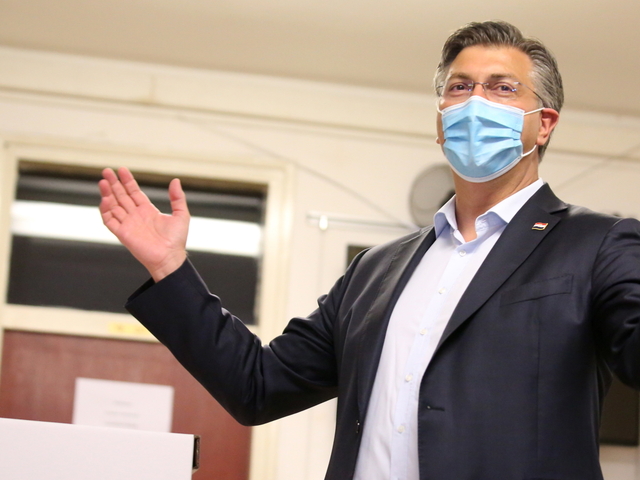 (di Franko Dota) (ANSA) - ZAGABRIA, 05 LUG - Croatia's conservatives were poised for victory in Sunday elections, an exit poll showed, putting the ruling HDZ in a strong position for coalition talks to renew its government. The party, which has dominated Croatia for most of its nearly 30-year independence, was slated to secure 61 seats in the 151-member house, according to Ipsos agency. Their main rivals, the centre-left coalition led by the Social Democrats (SDP), were far behind with 44 seats. Lacking an absolute majority, HDZ would need to find other allies to retake power. One possible option is the new nationalist party led by a folk singer, which was forecast to secure 16 seats according to the poll, revealing a shift to the right be voters. The election was held under the heavy shadow of the coronavirus pandemic and its economic effects, with Croatia's tourism-dependent economy on course for its steepest decline in decades. HDZ, which has led Croatia for most of its nearly 30 year independence, had been touting its relatively successful containment of the country's own virus outbreak thus far, with an official tally of roughly 110 deaths and 3,000 infections. The party had also presented Prime Minster Andrej Plenkovic, a former MEP with a calm demeanour who enjoys strong backing from Brussels, as a safe pair of hands to navigate the coming economic downturn. - 'Serious choices' - Ahead of the poll 50-year-old Plenkovic had dismissed his rivals as ill-prepared, telling voters that now is the time for "serious choices and not for political quackery". The key question is whether HDZ will go in for a tie-up with the nationalist 'Homeland Movement' of musician-turned-politician Skoro, who could hold the keys to a full majority. The 57-year-old, a former HDZ member whose folk tunes were a hit during and after Croatia's 1990s independence war, made his debut when he finished third as an independent in the December presidential election, inspiring him to form a new movement. He has drawn criticism from the left for sexist remarks and for tolerance of Croatia's pro-Nazi past. The Ipsos poll put the ultra-conservative Most party and a new leftist-green group tied in fourth place with eight seats each. The biggest task for the new government will be softening the blow of the coronavirus's looming economic fallout, forecast to be some 10 percent. "Everyone is scared about what will happen in autumn," Vesna Trnokop, a 60-year-old economist from Zagreb, told AFP ahed of the poll. "The coronavirus has changed economies, not only in Croatia, everywhere, so we should change our ideas." At polling stations around the country, voters were advised to wear masks and bring their own pens as the European Union country has recorded a new uptick in coronavirus infections in recent weeks. But the health situation did not appear to dramatically dampen turnout, which at two-and-a-half hours before polls closed was at 34 percent, some three points below the figure in 2016 elections. Officials also paid home visits to collect the ballots of 500 people -- some 10 percent of those in self-isolation -- who requested to vote, while others infected with the virus could do so through a proxy. ljv/ssm/har (ANSA).