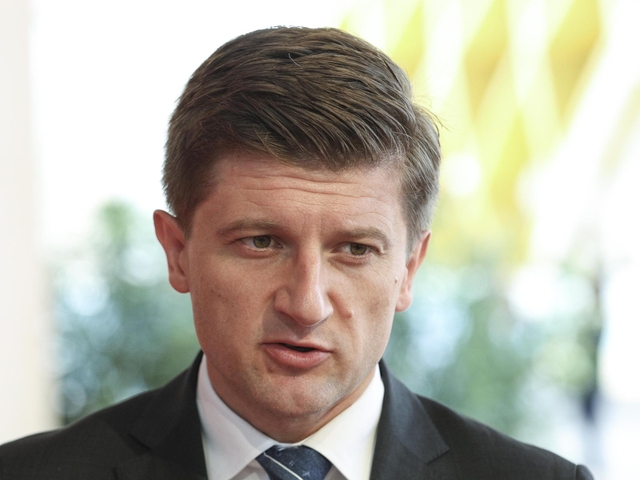 (by Stefano Giantin) (ANSA) - ZAGREB, 7 JUL - "Becoming a part of the Euro area is our strategic goal and we think this is the right moment to start the process," Croatian minister of Finance Zdravko Maric told ANSA, after Zagreb on Thursday sent a letter of intent to join the the Eurozone's waiting room, the ERM-2, to the EU institutions and to the other members of the Euro area. There is however no clear deadline for reaching the goal, Maric adds. Croatian media speculated that Zagreb could join the ERM-2 by 2020, while Croatia could enter the Euro area by 2023, the best-case scenario, the central bank governor Boris Vujcic told the daily Vecernji List. "We have not set a specific deadline with regards the euro adoption," as "at this stage we are primarily focused on preparatory activities and measures, and on the fulfilling all the necessary criteria for entering the ERM," Maric notes. Croatia sees "significant and permanent benefits from adoption of the euro", the minister adds. Among them, the decrease of risks to macroeconomic and financial stability, more favorable conditions of financing, lower transaction costs but also "the elimination of currency risk to which households, corporations and the government are exposed." "These benefits should enable stronger economic growth, increase economic efficiency and make Croatia more attractive for investments," Maric says. Croatia was severely hit by the global economic crisis, both in terms of decline in GDP growth and unemployment, but today the country has recovered and it's ready to start the process of joining the Eurozone, the minister confirms. According to Maric, "the Croatian economy is growing in a sustainable manner in recent years." "Although the growth rates are lower compared to the pre-crisis period, the growth pattern is much healthier than before. In particular, export performance has been robust, the current account is in a comfortable surplus, while the net international investment position has improved markedly." The country, which joined the EU in 2013, has recovered economically, and "the budget deficit has been eliminated, the public debt ratio, while still above 60% of GDP, is declining at a rapid pace - by around 3pp per year." Meanwhile, "the unemployment rate fell from above 17 percent in 2013 to about 8 percent in 2018, which is in line with the EU average," the minister says. The "Croatian banking system is highly liquid, profitable and well capitalized and non-performing loans have reduced significantly." The main risks for the Croatian economy are currently "linked primarily with the external environment. They refer to the re-strengthening of trade tensions, to the extension of customs duties, stronger slowdown in economic growth than expected," but also to "constraints on the supply side, mostly the lack of labour force" on the domestic front, a common problem in the Balkans and in Central- and Eastern Europe, caused mostly by demographics and emigration. Croatia will at the same time work to increase the support for the euro among the population, currently split between those willing to abandon the 'kuna' and those suspicious mostly about negative effects on prices. An information campaigns highlighting the benefits of joining the Euro area is planned after the entry into the ERM-2. "A recent public opinion survey has shown that slightly more than 50% of Croatian citizens support the plan to progress towards the euro area membership," Maric explains. However, "the support for the euro would probably be much higher if people were less concerned about the possible impact of the euro adoption on consumer prices. Such fears were noticeable in other new EU member states as well, but these fears began to diminish after the information campaign was launched. We expect the same to happen in our case."