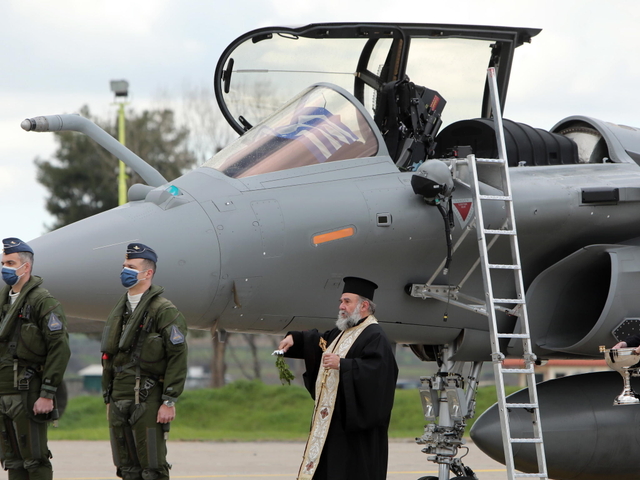 (ANSAmed) - TANAGRA, 19 GEN - Greece on Wednesday received six Rafale jets from France as part of a multibillion-euro agreement for the acquisition, according to Athens and Paris, to increase the EU's defense capacity. Many observers however think the accord is mainly aimed at countering Turkish ambitions in the Mediterranean. The six fighter jets landed at the airbase of Tanagra, some 70 km north of Athens, after flying over the acropolis escorted by Mirage jets previously bought from France. Prime Minister Kyriakos Mitsotakis, who attended the ceremony, said that the new jets "make our air force one of the strongest in Europe and in the Mediterranean" and boost the "flexibility" of Greek diplomacy. He added that there was an "urgent need" to boost Greece's air force, often engaged in pretend combat with Turkish jets in the Aegean airspace disputed by Ankara. Orthodox priests blessed the jets on the tarmac of Tanagra. Greece and France originally signed an agreement worth 2.5 billion euros last January for 18 Rafale jets, 12 used and six new aircrafts. Last September, Greece and France signed a defense pact of mutual assistance that also provides for the acquisition by Athens of three Belharra frigates. Mitsotakis announced the intention of buying another six Rafale jets, bringing the total order to 24. The frigates should be delivered in 2025 and 2026 for a value of about three billion euros. (ANSAmed).